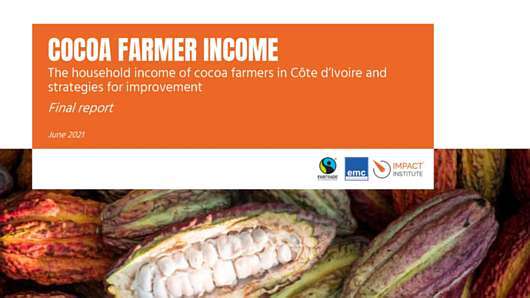 This study is a follow up to a previous study published in 2018, as part of our commitment to understanding and driving progress on cocoa farmers earning a living income, and to transparently sharing what we’re learning so farmers can benefit.

The study finds that the incomes of Fairtrade cocoa farmers in Côte d’Ivoire have increased by 85% compared to the 2018 study.

A significant number of farmers have moved out of extreme poverty: 61% of the farmers’ households in the survey are living above the extreme poverty line, as compared to 42% in the previous study (19 percentage point increase). The study also found that a greater percentage of Fairtrade cocoa farmers were earning a living income (15%, compared to 7% in 2018). The percentage of farmers living above the poverty line also increased from 23% in 2018 to 43% in the current study (20 percentage point increase). Better crop yields and diversified income sources are the main reasons for the improved incomes, according to the study.

An additional analysis also looks at the impact of the Fairtrade price mechanisms on farmer income, using a slightly different sample than the one used for the comparison with the 2018 study. This analysis shows that if Fairtrade farmers had sold all their volumes on Fairtrade terms during the October 2020 main harvest, household income would have jumped by 9%. However, in reality the sampled cooperatives sold on average 45% of their volume on Fairtrade terms. Modelling of different price and yield scenarios show that if all farmers were paid the living income reference price and reached the target cocoa yield set in our living income model, almost all farmer households would be out of extreme poverty.