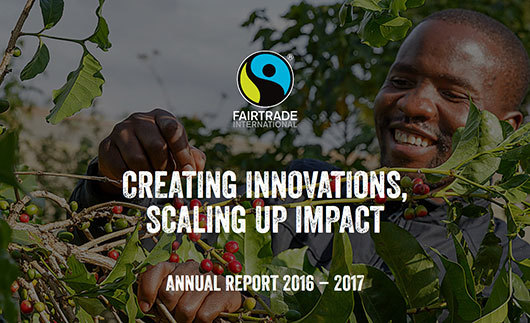 Our 2016-17 annual report was presented as a microsite, and provides an overview of key Fairtrade activities and statistics.

"April marked the 20th anniversary of Fairtrade International. Over the past two decades, Fairtrade has gone from being a small niche initiative to a movement with global reach. In 2016, consumers in more than 130 countries spent an estimated €7.88 billion on Fairtrade products, almost five times more than only a decade before. This significant growth in sales now benefits more than 1.6 million producers and workers in 73 countries. In addition to receiving revenues that aim to cover the cost of sustainable production, producers also receive a Fairtrade Premium; that is, an additional amount to invest in projects of their choice, such as programmes to improve crop productivity, or education, health, or housing initiatives. In 2016, the Premium amounted to €150 million, the highest in Fairtrade’s history."